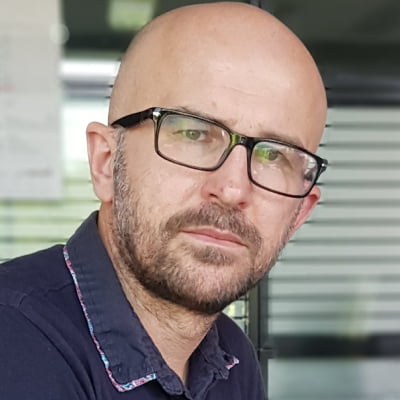 Mladen Obrenović is PhD in Communication Science and a professional journalist, professional career as a journalist back in 1996, working for the next 14 years for local media covering the eastern part of Croatia. He moved to a position of a correspondent (form Vukovar) for newspapers Glas Slavonije and Jutarnji list. From 2010 to 2013, he took the position with web portal Tportal, based in Zagreb, where he covers daily politics and actual themes of the Croatian society, specializing in covering Croatian Assembly and Government as well as institutions of the law. In 2013 he started working for Al Jazeera Balkans in Sarajevo, as a journalist and from 2019, as a news editor. Since August 2020, he has been working as a journalist in Balkan Investigative Reporting Network Bosnia and Herzegovina (BIRN BiH). From October 2017 to September 2018, he was an assistant lecturer at VERN University in Zagreb, teaching the Theories of Media. He took part in numerous media courses, scientific conferences and as a result, he published numerous scientific studies. He is a member of the Advisory Group for Promoting Media and Information Literacy in Bosnia and Herzegovina.

Fact-checking platforms as sources for journalists: How to get to the ‘unproblematic’ fact

“President Barack Obama was born in the United States. Period,” Donald Trump said during his attempt to enter the